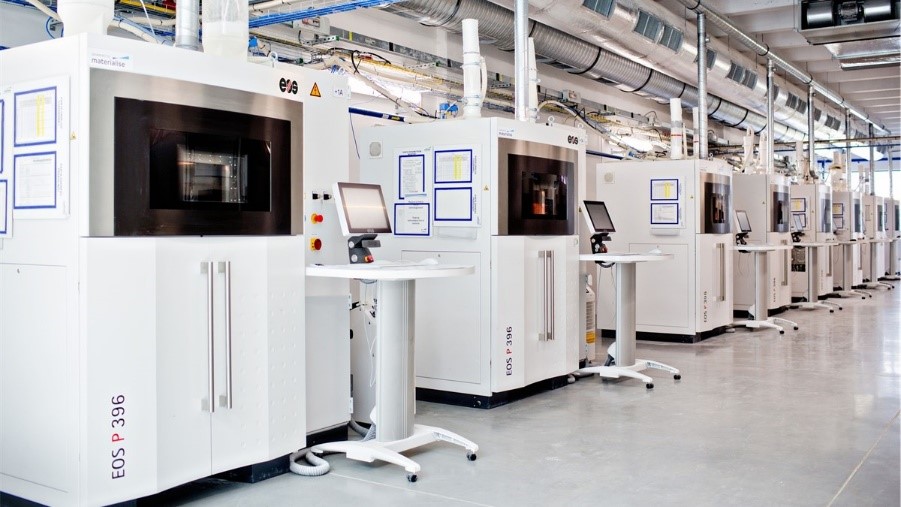 Materialise was founded in 1990, with the goal to enable new uses for the extraordinary potential that 3D printing offers. Since then, they have leveraged their experience to create a range of software solutions and 3D printing services, which together form a backbone for the 3D printing industry.

Their open and flexible platforms enable players in industries such as healthcare, automotive, aerospace, art and design, and consumer goods, to build innovative 3D printing applications that make the world a better and healthier place.

These operations are interdependent, and focus on realising the benefits of 3D printing and additive manufacturing technologies.

Headquartered in Belgium, with branches worldwide, Materialise has combined the largest group of software developers in the industry with one of the largest 3D printing facilities in the world. Ultimately, they empower their customers to transition towards a digital manufacturing process and to launch innovations that have the potential to forever change the faces of their industries.

Materialize employs some 2,000 people worldwide in 19 different countries. In 2019, the company achieved a turnover of € 196.7 million.

Materialise realized that the data they were generating to deliver 3D printed objects could be of vital importance to keep innovating in their market. As such, they started very quickly with capturing and analyzing data in an experimentation way of working where the R&D department set up several Proof of Concepts using amongst other Machine Learning techniques. Materialise set up this platform in a Microsoft Azure environment, making use of the PaaS services available. However, soon, they realized that they needed to make their data platform setup more mature in order to generate true value for the business. Their initial setup in Azure needed to be evaluated and optimized for future needs.

As Materialise realized they had limited experience in designing and setting up a modern data platform architecture, they reached out to element61 to support in this initial assessment. element61 conducted a solution assessment with Materialise in order to create a roadmap to get Materialise accelerated with analytics and design a clear, actionable data platform strategy.

element61 conducted a series of interviews with relevant stakeholders capturing the current and future needs of the team. These needs were further refined in a number of workshops around key topics (such as Security, Machine Learning use cases and self-service BI).

At then end of this assessment, element61 presented and shared a clear and actionable roadmap to build out a mature Data Platform using Microsoft Azure technology. This platform is able to handle the different business needs and ambitions as shared by the Materialise team.

At this stage, element61 continued the work and established the basis for the Modern Data Analytics platform, fully running on Microsoft Azure cloud infrastructure. The full Modern Data Platform was rolled out using best practices (such as Infrastructure as Code and CI/CD), in collaboration with the internal teams.

A key aspect of this platform was to enable both real-time and batch use cases. As such, a dual flow was to be set up with ingesting real-time data sources (printer sensor data, images, environmental sensors and maintenance data) through IoT Hub and Event Hubs and in parallel, ingest batch data (such as their own Streamics software and other business systems) using Azure Data Factory.

Both data streams are ingested in an Azure Data Lake with multiple zones (bronze, silver, gold) where each of these zones has an increased level of cleansing and aggregations stored. As such, each user can access the data that they require. A data scientist would require more raw data than an operational manager. The data scientist would as such, access the data from the silver layer whereas the operational manager would consume data coming from the gold layer (in an aggregated format).
The full platform implemented can be see here: 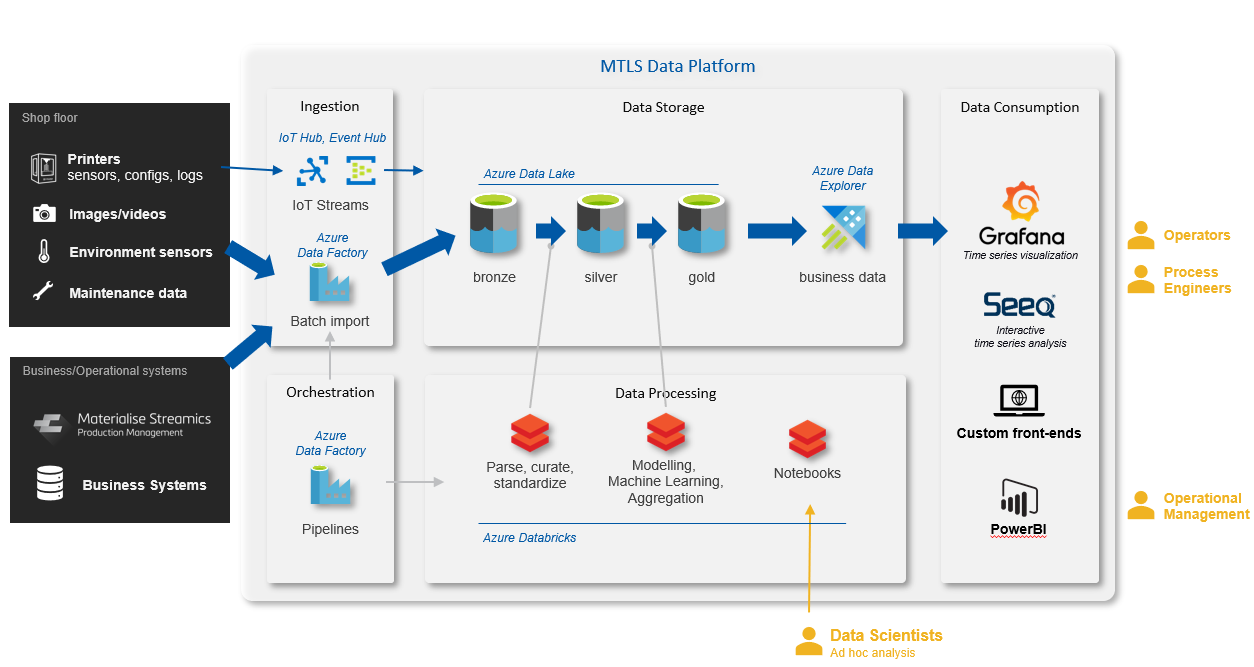 In order to consume data, element61 implemented the right tool, for the right use case using the right data. Different flavors were implemented at Materialise: 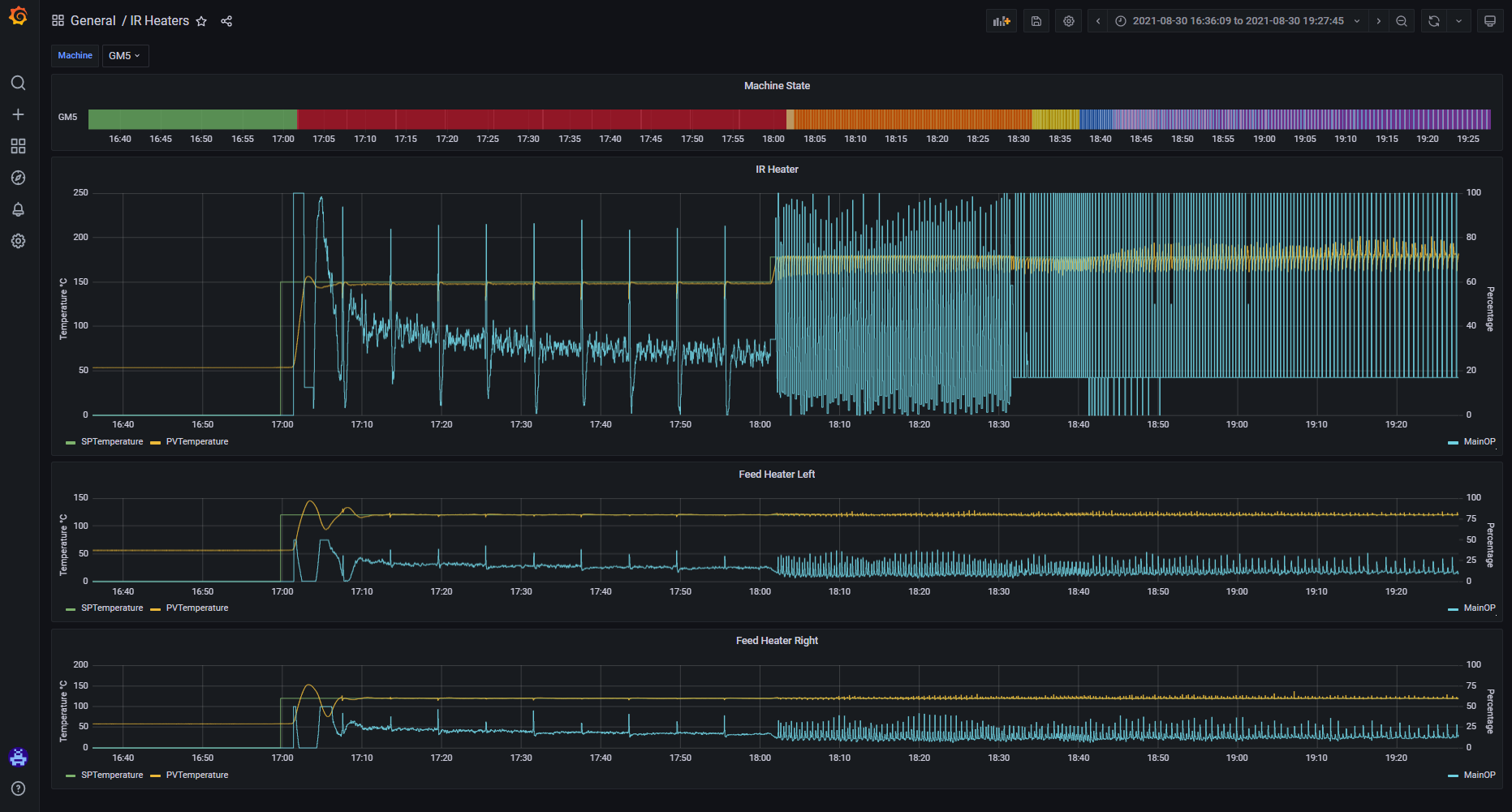 The Modern Data Platform enables Materialise to focus on value creation in their process, while maintaining solid and sustainable development practices (Agile, DevOps, multiple environments). This platform is now a fully mature setup capable of supporting the R&D team to build-out innovative use cases and implement them seamlessly in production.

As such, the platform will help Materialise to accelerate with their innovative use cases and continue their growth trajectory they have achieved since their inception.