BW/4HANA intends to provide real-time insight on data, across a diverse IT landscape to allow a single harmonized view on the data (“single point of truth”). It tends to minimize the movement of data across the data warehouse layers and simplifies the connectivity with external data sources. A redesigned version of the classic Layered Scalable Architecture best practices (under the concept of LSA++) offers a new framework to convert the data warehouse into the BW HANA-Optimized version.  BW/4HANA also leverages in-memory capabilities of the HANA database, offering with this platform a performant analytics solution, which can handle huge volumes of data (e.g. IoT, Big Data).

SAP BW/4HANA Platform can be deployed On-Premise and in the Cloud and can consume SAP and non-SAP data sources.

SAP BW/4HANA brings along a simplified set of data warehouse objects and removes a lot of functionalities which were only required to overcome the limitations of traditional RDBMS (e.g. extended star schema/cube for OLAP reporting is in the HANA-optimized version no longer relevant). This reduces the complexity for designing, implementing and modifying the data warehouse environment.

The modeling structures have been reduced from 10 to the following 4 objects: 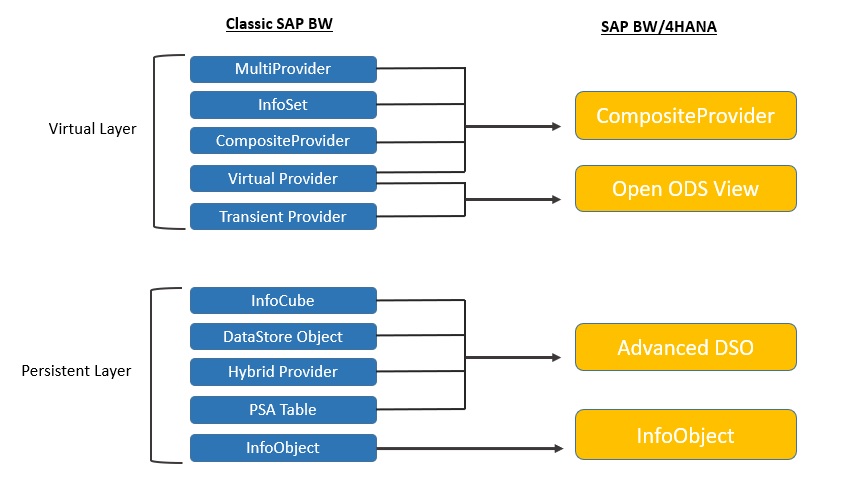 Traditional data warehouses are built upon the Layered Scalable Architecture best practices (LSA). It is based on several layers with data being physically transferred (e.g. Acquisition, Transformation, Data Marts Layer). The new LSA++ architecture offers a much simpler and smaller landscape which relies more on virtual objects and avoids duplicating data between layers without compromising the performance.

In LSA++, the first layer is the “Open Operational Data Store Layer” or “Open ODS Layer”. It is similar to the PSA concept (from LSA) where raw data is physically stored in SAP BW with exactly the same structure as in the source system. Data can be extracted in batch mode or using real-time replication. The next layer is the “Core Data Warehouse Layer” where data can be transformed, cleansed and consolidated. This is where data from multiple sources (SAP & non-SAP) gets merged into one harmonized definition. The next layer is the “Virtual Data Mart Layer”. With SAP HANA, those structures now become virtual and can combine data from other layers. Those virtual InfoProviders can be queried upon and offer more agility as opposed to the historical cubes where data had to be physically loaded. Depending on the needs to get data consolidated, the Core Data Warehouse Layer can become redundant:

Figure 3: Flexible reporting at any layers of the Data Warehouse 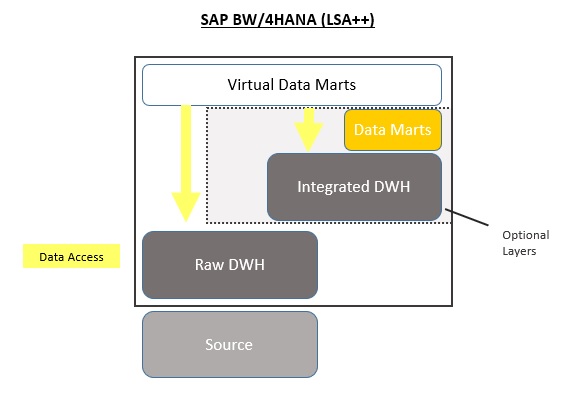 To summarize, the new LSA++ concept offers now a framework for a more flexible Data Warehouse which deals more easily with changes in business, technology and requirements.

With SAP BW/4HANA, the number of BW connectors has been reduced to 4 types, which simplifies significantly the data integration: 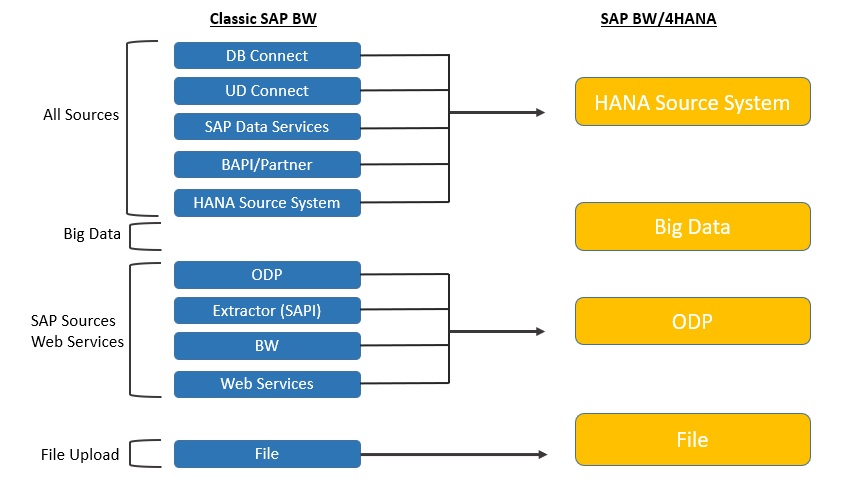 With those two connectivity types, data can be made available in batch mode, using real-time replication or direct access.

When you activate objects within the BW/4HANA environment (e.g. ADSOs, Composite Provider), HANA views are automatically generated within the SAP HANA database. This allows using SQL logic on top of the generated views combined with data from native SAP HANA (e.g. data fetched directly from S/4HANA). From an end-user perspective, HANA views can also be consumed by BI front-end tools, such as SAP Lumira 2.0 or used for predictive analysis scenarios. 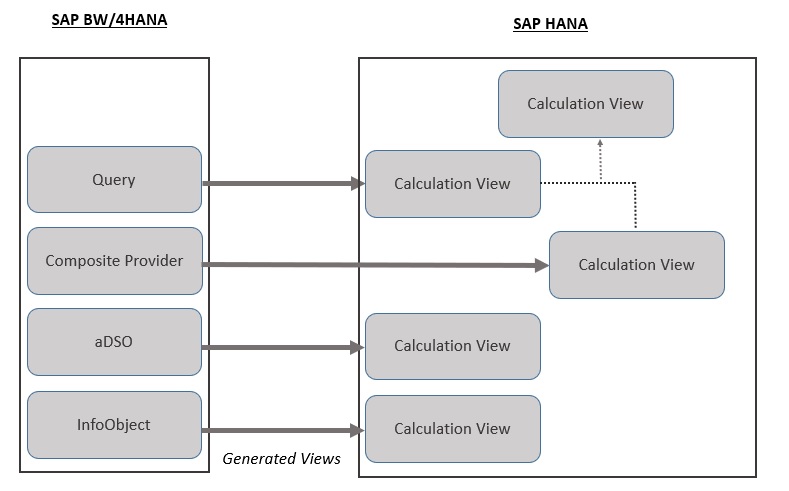 BW/4HANA brings along a simplified interface for users, designers and administrators. 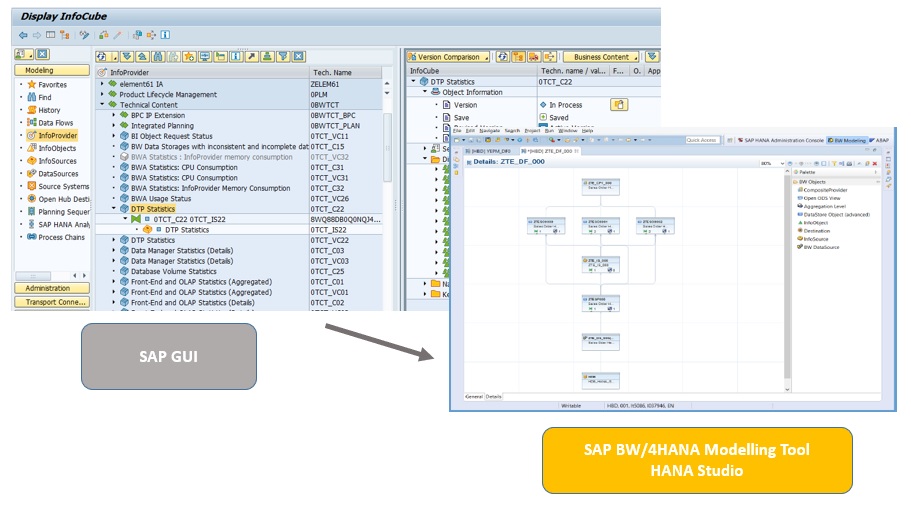 2. New Business User Interface: SAP Business Explorer (BEx) is no longer supported. This means that the following tools will be gradually decommissioned: BEx Query Designer, BEx Analyzer (Workbooks) and BEx Web Application Designer. Any Existing BW queries will continue to work with SAP BW/4HANA but will be maintained with the HANA Studio Modeling Tools going forward. 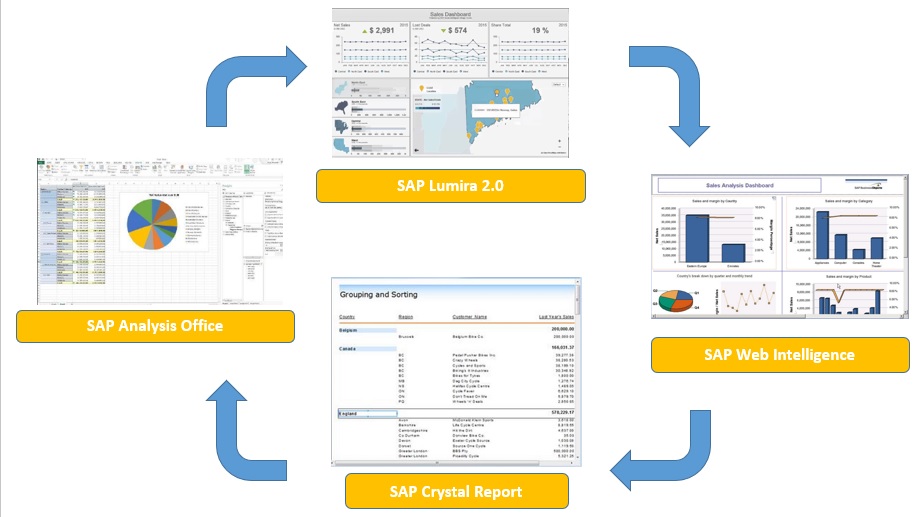 3. New Administrator Interface: some maintenance tasks like the ABAP Process Chain Monitor can now be performed from the new UI5-based Interface.

SAP BW/4HANA is built on top of SAP HANA and supports all ‘high-performance’ capabilities. Aggregates are no longer required, fewer indexes are needed, data loads and execution of queries run faster. This performance improvement is ensured by a push-down of complex BW operations and calculations to the HANA database (vs. the application layer). 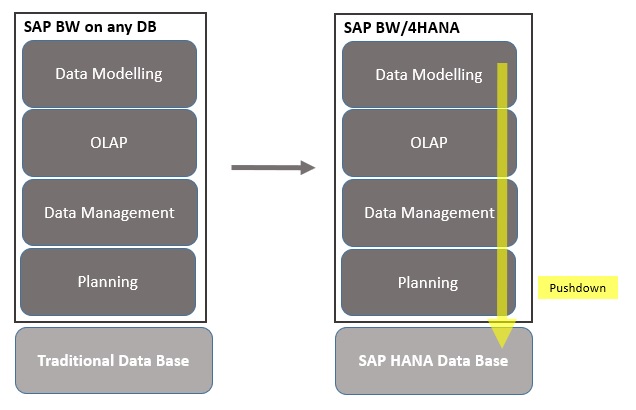 SAP BW/4HANA offers a strong foundation for real-time analytics.  It provides a good interactivity between historical and live data residing in a diverse IT landscape. HANA specific libraries, like R-Script or custom HANA procedure are delivered to enhance the data with simulations, predictive analysis, etc.

SAP BPC 11.0 was released in Q2 2017, exclusively for SAP BW/4HANA. Similar to previous releases, BPC for BW/4HANA is offered in both Standard and Embedded versions. SAP Analysis for Office 2.5 becomes the primary Excel Client, by combining the EPM and the Analysis plug-in into one product. The EPM plug-in is being positioned for BPC Standard and AO for BPC Embedded. The EPM Add-in as a standalone product (not embedded in Analysis for Office) is no longer supported with BW/4HANA.

Does SAP S/4HANA replace SAP BW? What about BW/4HANA vs. BW embedded?

S/4HANA has tremendous reporting capabilities. Some reports which historically would run on SAP BW may be considered for reporting directly on the transactional system. This also means having the latest data at any time and avoiding the complexity of moving data from ECC towards BW.

If you are implementing S/4HANA and do not have a BW system in place, it’s definitely a good advice not implementing SAP BW as of the very first day. There are certainly scenarios where S/4HANA on its own does not require SAP BW to meet all reporting and analytical needs of your company. Yet, the advantage of SAP BW (vs. a transactional system) is not limited only to the performance of an OLAP system. Most SAP BW systems include complex business transformations, consolidation of SAP systems (S/4HANA, Successfactors, etc.), non-SAP systems (machine, sensor data, etc.), structured and unstructured data sources (Facebook, Twitter, etc.). The increasing diversity of data sources also requires more agility to accommodate those changes in the IT landscape.

As of NW 7.0, SAP ECC has an embedded SAP BW. That SAP BW system has the advantage of consuming on-the-fly data that resides in S/4HANA, without any data replication. Yet, as mentioned earlier the benefit of running a separate instance of SAP BW includes the consolidation of data from multiple systems (also non-SAP). Going for the embedded SAP BW can also become a disruptive element to the most critical priority of an ECC system: ensuring a production system up and running with a clear authorized access. Keeping Operational and Strategic systems separate should definitely be part of a more global IT Strategy and Architecture.

How does the new BPC 11.0 relate to the BPC optimized version for S/4HANA?

As mentioned earlier, SAP S/4HANA has an embedded BW 7.5 system, which also includes SAP BPC 10.1 for planning and consolidation. Both products (SAP BPC 10.1 for S/4HANA and BPC 11.0 for BW/4HANA) are totally independent and run on different platforms:

With the release of BPC 11.0, a conversion tool for existing BPC NW customers is also available.

SAP BW/4HANA comes with predefined Business Content. This is a redesigned version of the classic SAP BW Business Content, which follows the recommendations of LSA++ and is optimized for SAP HANA (cubes removed, conversion towards ADSO, ODP as acquisition layer, etc.). So far, the following modules have been released:

Each customer starts the migration from a different place. Three major paths are available for transitioning and are assisted by tools for limited disruption.

System Conversion: for customers running SAP BW on any database, the recommended approach is to upgrade to SAP BW 7.5 and apply the SAP BW/4HANA Starter Add-on. This provides tools to convert classic BW objects and data flows into their HANA-optimized version prior to migrating to SAP BW/4HANA.

Landscape transformation: large companies with multiple SAP and non-SAP Data Warehouses should consider a landscape simplification converging into one global BW/4HANA system. This option is very similar to the ‘greenfield approach’ but starts with a data carve-out phase.

Unlike previous BW releases, BW/4HANA in combination with ECC is not free any more. There is a new license model based on the size of BW, which goes with an HANA license on runtime or other metrics. Open Hub licensing has been removed, which means that BW/4HANA can be consumed from any SAP or non-SAP BI tools without additional charges (in the past, OpenHub used to be licensed in classic BW). Refer to your SAP licensing representative for more information.

Similar to S/4HANA, BW/4HANA introduces fundamental changes in data models and features. With BW/4HANA, SAP intends to deliver the next-generation of Data Warehouse, reducing data transfer and data duplication whether it resides within the SAP HANA Platform or in third-party systems. It delivers a limited set of objects for modeling a layered architecture more flexible and provides a simplified data integration with external data sources. This results in more agile solutions and rapid application developments.

BW4/HANA is delivered with a modern UI5 web-based interface for Business Users and Administrators. The traditional SAPGUI Interface is gradually replaced by a more user-friendly BW modeling tool integrated within HANA Studio.

BW4/HANA is designed to be an open and highly performant platform. Through the use of the ‘push-down’ algorithm to the SAP HANA database, this new product provides a powerful real-time analytics solution within a mixed SAP and non-SAP Landscape.