What is SAP S/4HANA Group Reporting?

SAP S/4HANA Group Reporting is the latest Financial Close and Consolidation software from SAP. The solution supports an organization’s finance department by collecting, processing and then presenting consolidated financial statements that are in compliance with a given set of GAAP requirements such as US GAAP or IFRS. In addition to supporting reporting requirements to external stakeholders, internal reporting requirements are also met using this type of software.

Group Reporting comes in two flavours: cloud and on-premise. Both versions offer the same functionality.
Two versions exist due to the deployment option that was chosen for S/4HANA.

Why would my organization choose to implement this tool?

Financial Close and Consolidation software has been around for a long time.

Some of the first versions of Hyperon Enterprise were released in the early 1980s. The predecessor of the current SigmaConso tool, driven by Allen White, was also launched in the mid 80’s. So generally speaking, the vast majority of large complex organizations with a lot of affiliates, have, or have had, this type of consolidation solution for quite some time. Furthermore, SAP has had four software solutions within this market space for some time. Two of which were the result of acquisitions (SAP BPC, formerly know as OutlookSoft and SAP FC, formerly Cartesis) and another two home grown tools (SEM BCS and EC-CS).

So why has SAP developed, and is now promoting, a fifth tool in this marketspace?

One: SAP took the opportunity to merge these existing technologies onto one solution and to provide a clear roadmap for the future to its customer base.

Two: SAP is using this opportunity to propose a purpose-built tool that is fully integrated into the S/4HANA platform. SAP Group Reporting is not a migration from a previous solution, it is built on the shoulders of the four tools mentioned earlier. Since the tool is fully integrated in S/4HANA, it re-uses the same interface, the same dimensionality (unless consolidation specific), same development tools, same infrastructure, same pretty much everything …

Furthermore, another aspect that is important, but generally underappreciated, is the rollout and training required of a new Consolidation solution. Since Group Reporting is integrated with S/4HANA Finance, users do not need to be trained on a new interface and they do not need to manage an additional login. Furthermore, the security team only needs to grant additional rights to existing users on the S/4HANA platform.

What happens if we are using an existing SAP consolidation Solution ?

As stated above, SAP currently has four existing consolidation tools. Organizations that are currently using these existing solutions can do so within the timeframes for standard maintenance. As per the writing of this Insight (2020), those maintenance plans for SAP existing tools include the following:

It is important to mention that investments that were made in these tools, are safe for quite some years to come. Additionally, both tools support an environment where the landscape is a mix of SAP and non-SAP accounting platforms and the S/4HANA integration possibilities do not play an important role.

How does Group Reporting integrate with S/4HANA?

The mapping shown above is simply an association between accounts in S/4HANA and Group Reporting. This mapping can be performed directly in the application above or by downloading the list to Excel, updating it and then re-importing back. 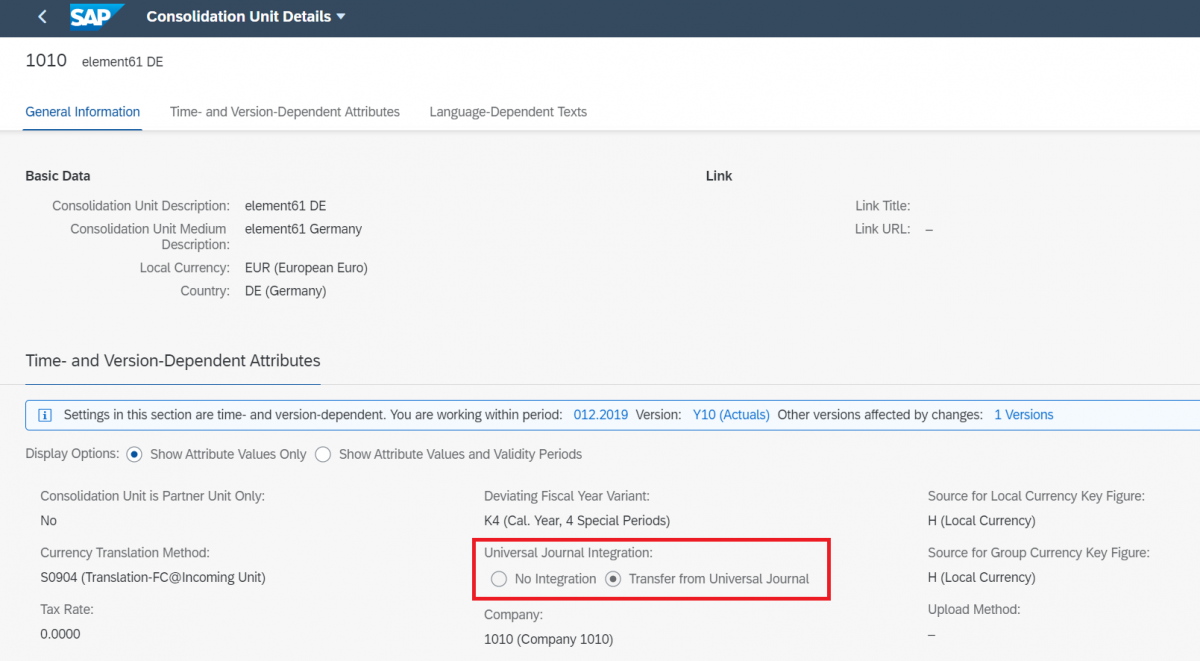 To load or as SAP is calling it, to release universal journals from S/4HANA, we execute the Rel Uni.J step, by highlighting the task for a given consolidation unit and selecting the Update Run option.

To submit universal journals for this consolidation unit, the user would need to click on the Save button in the upper left-hand corner of the following screen. To review the data that is being submitted, the user can execute the Universal Documents (Total), Universal Documents (Difference) or Data from Prior Periods Without Release. The load itself is a delta load, so only the difference between the current and prior load is performed.

That -in a nutshell- is pretty much it to updating and executing a data load from S/4HANA to Group Reporting.

How does Group Reporting provide transparency on data submitted?

The user can drill to the source directly from the data validations, the intercompany reconciliation process and from analysis reports. This functionality provides the maximum transparency on how a specific balance is built up in the application.

When we look at the following print screen, we can see the output for a data validation. In this case, we have the most basic type of validation, assets equal liabilities plus equity. The left and right value columns display the outcome of this validation.  By clicking on the Drill Down function, we can drill down to an FS item with the Account Details function or we can go straight to the source level data using the Group Journal function. 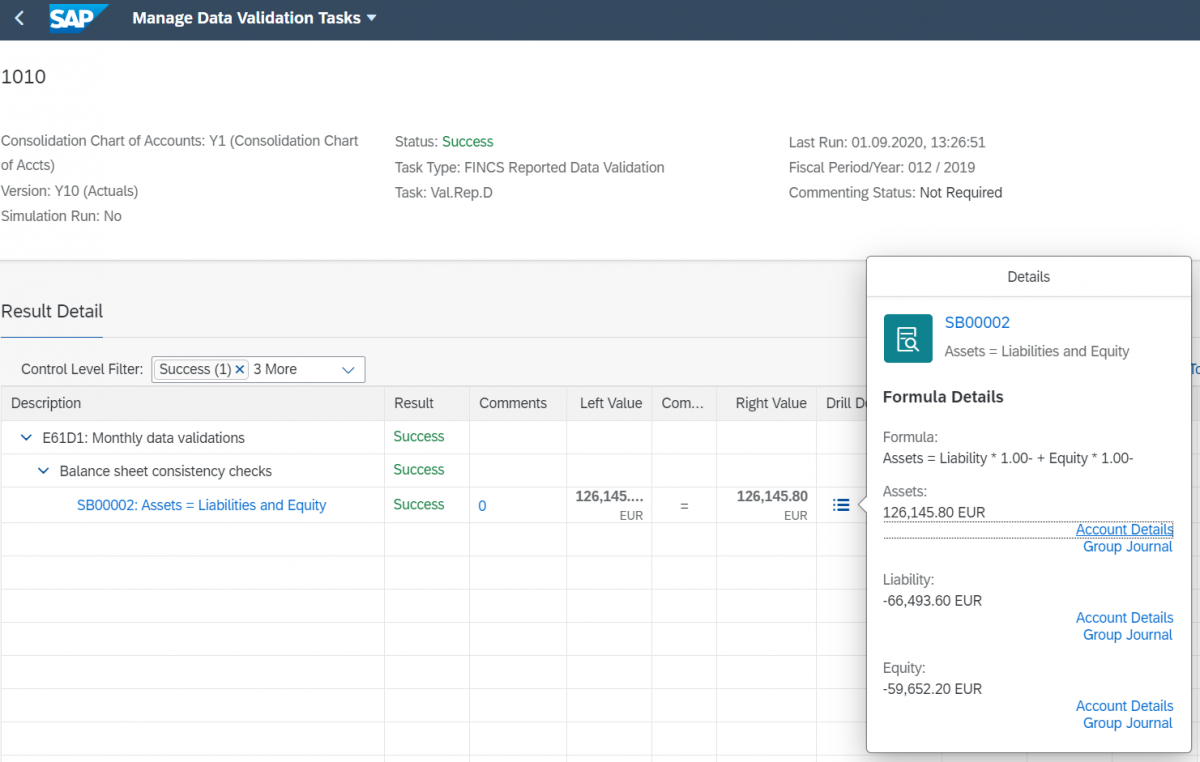 The below screen is produced when clicking on the Group Journal function in the print screen above. This detail shows the individual documents that comprise the balance that is displayed above. The user can drill down to view each individual document to review its content and purpose.

Setting up this drilling functionality did not require any specific technical skill. The validation was created by selecting specific node elements of the FS item hierarchy. Once the nodes were selected, the drill functionality was enabled by default. 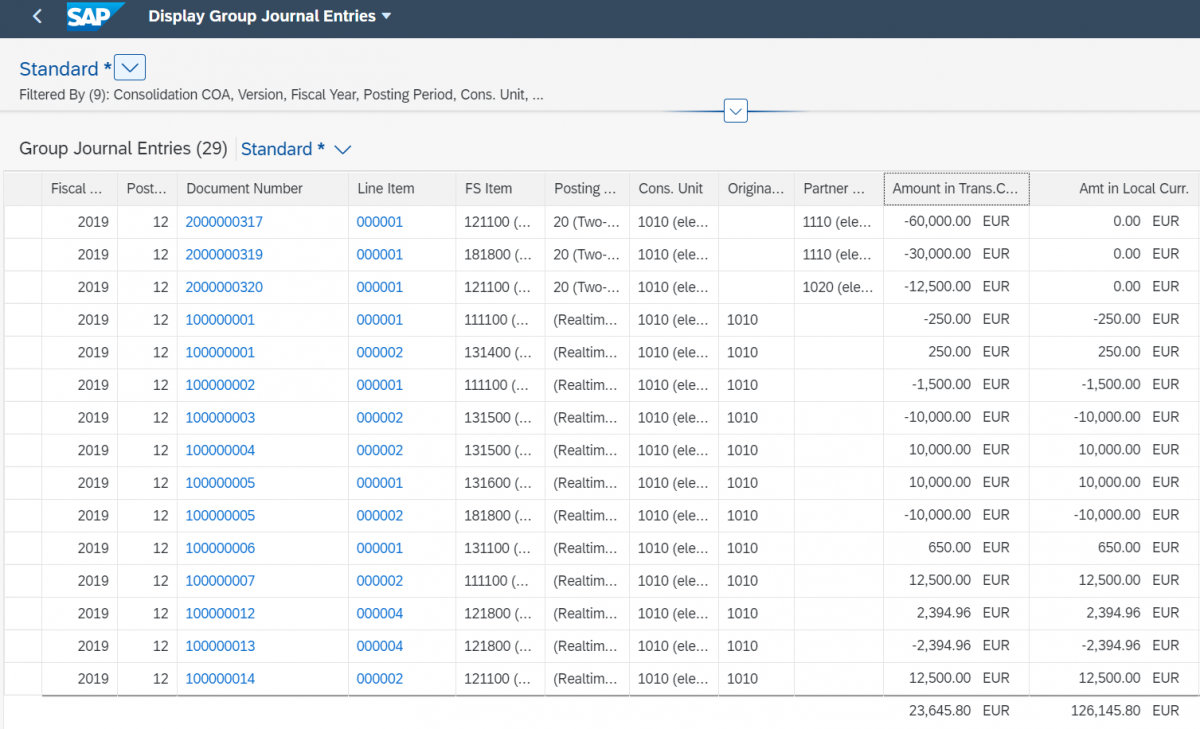 Drilling down to the document level is also possible from the intercompany reconciliation facility.

In the following, we can see that Reconciliation Balance application, which shows the selected amounts at the Financial Statement Item or FS item level.

By selecting one of the arrows to the right side of the screen that is associated with each balance, the user is taken to the transaction level displayed in the screen below. This print screen displays each accounting document for the consolidation unit and its trading partner. In this example, the account documents are not assigned or matched. Regardless of whether the documents are assigned or not, the user can drill to view the details of each document. This is again, default functionality of the application.

Finally, a user can drill down to the document level using the reporting capabilities that are apart of Group Reporting. As we see with the following standard report that has been built in the application Group Data Analysis, all the user has to do is select the Jump To either at the top right of the screen or by opposite mouse clicking and select this option, the user can then drill down to the base level documents that make up a balance on an FS item.

The results are again listed below where we can see the document level information. This drill option is completely standard functionality.

So that was a lot of drilling, but the point is to show that through multiple points in the application, we can review the details of a given balance. This gives the user the most information possible for passing an invalid validation, reconciling an intercompany transaction, or explaining an amount that appears on a report.

What if I need to consolidate data that is not in S/4HANA?

It is very unusual that an organization can produce complete set of Consolidated Financial Statements directly from data that is only contained in its General Ledger. There are always some disclosures that require data that is not present in the General Ledger. Many organizations also do not have all their affiliated entities on the same source system. If an organization has an existing planning or budgeting tool that produces data that needs to be consolidated, this type of data could also be loaded and consolidated.

As such, any consolidation system needs to have the potential for data entry of additional figures and commentary (commentary will be supported in the Q1 2021 release) plus the ability to load amounts as needed from another system. Consequently, SAP has provided an additional tool called Group Reporting Data Collection (GRDC) to support these requirements.

GRDC is an additional module that is hosted on the SAP Cloud Platform. It contains functionality to develop forms that can be used for data entry. There is also a fully-fledged ETL component that can be used for data loads. A key aspect of GRDC is its re-use of master data that has already been defined within the rest of Group Reporting. As a consequence, the drilling functionality is supported by Group Reporting can access source amounts in GRDC. Interesting to note is that master data creation is supported in Group Reporting, which is useful when you want to set up forms for data entry and you need to create additional master data.

What if I have enhanced reporting requirements or I need to collect and Consolidate budget or forecast data?

Generally speaking, a Consolidation solution must also have the ability to produce a suite of highly formatted reports for management reporting purposes or external reporting. Group Reporting does provide a report builder, which is outstanding for ad hoc analysis, but these reports are web-based data grids that are not really suitable to present to stakeholders outside of the finance department. Below is an example of an ad hoc analysis report.

What we see above is a balance sheet by entity. It is made with minimal effort by dropping and dragging dimensions that are available in the list to the left of the screen into or out of the report. The report can be saved as a tile to be re-used later or the output can be exported to Excel. Basically, this is good facility for ad hoc analysis which requires almost no training.

However, we can integrate SAP Analytics Cloud (SAC) with Group Reporting by using a CDS view.

Below screen is a standard SAC story that has been integrated with our instance of Group Reporting. Since it is a SAC story, we have full access to the functionality of SAC. 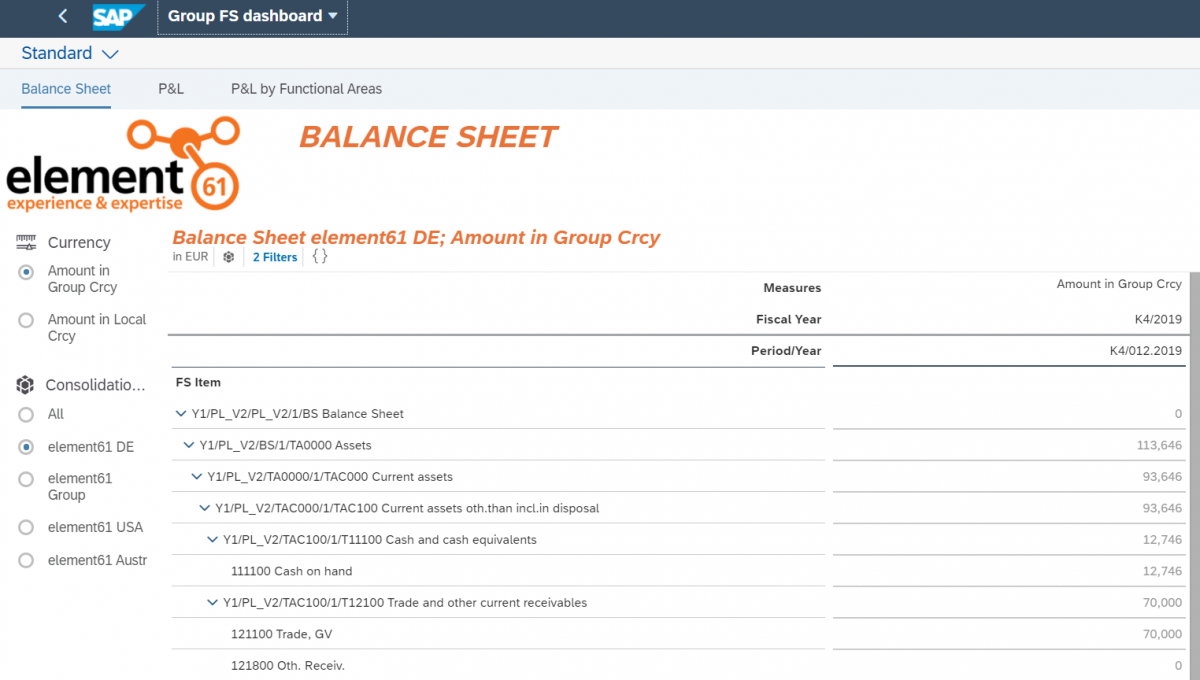 Finally, and perhaps most importantly, we are able to integrate Excel with Group Reporting via existing functionality in SAC. This can be done using SAC’s native add-in for Microsoft Office or by using Excel Analysis for Office that is connected to a SAC story.

Once we have integrated SAC with Group Reporting for S/4HANA, we are also able to collect and generate forecast or budget data. This data is collected, it can be released back to Group Reporting in a similar manner as actual data that resides in the general ledger.

How can I manage my disclosure reporting or submit data using iXBRL?

To close the full loop of requirements for a consolidation system, SAP also plans to integrate its existing CDM tool Disclosure Management with Group Reporting. This is currently scheduled for Q1 2021 release. This integration will allow Disclosure Management to extract data stored in Group Reporting for the purpose of producing documents in Word, PowerPoint slides or for producing data in an electronic format such as iXBRL.

What to know more about SAP S/4HANA and SAP's Consolidation solutions ?

Check these pages to read more on SAP S/4HANA: