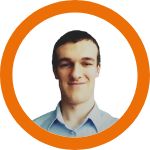 What is process advisor?

As a business user, you can use a process advisor as a tool for process mining. This preview feature is a component of the Power Automate website and was launched in early 2022. The feature allows the import of the event or log data in order to gain detailed insights into processes in a low-effort way. To understand, observe and improve the processes, process advisor automatically creates a report. The report consists of a process map, several visualisations and KPIs.

Process mining in general is used to gain insights into every process, within an organisation or department, in order to create an overview on bottlenecks. Thus, it creates opportunities to reduce operational costs. Examples of common domains where processes are analysed are logistics, finances and sales.

Process advisor also houses task mining. A property of task mining in process advisor is that it suggests which tasks are suitable for automation. In this insight, we will only investigate process mining. For that reason, automation suggestions will not show up or be discussed as they require different data.

Why use process advisor

With the help of the automated process maps, a business user can easily visualise the activities that take place during a process. This is done by importing event data with Power Query. Process advisor will generate a process map to deeper understand the processes. It’s also possible to discover processes that are not (yet) compliant.

With the provided visualisations that are based on time, processes that take the longest or are repeated the most can be spotted easily. This results in quickly detecting where the bottlenecks are and discovering opportunities to optimise the processes.

Preparation phase
Before diving into process mining, it’s essential that the data meet an important requirement. For process advisor, this translates to three necessary fields for every row in the table. Those fields are: a case ID, an activity name and a start timestamp in event logs. A case ID can for example represents a customer or invoice ID. A fourth field, which is an end timestamp, is required when working with activity logs. Those three or four fields need to be mapped to fixed columns provided by Power Query after importing the data.

The connection to the data source is done through Power Query. It offers a wide range of connectors for data sources, for example a CSV file or connect to SAP directly.
After establishing a connection with the data source, Power Query Editor opens. This provides the possibility to transform the data, including filtering and choosing which columns to keep. Finally, it’s necessary to map the previously discussed three or four mandatory columns. One limitation here is the maximum import amount of 150.000 rows.

After mapping the columns, process advisor will do the work to start process mining. It will automatically generate a report with a fixed format, meaning that the report is not adjustable in any way. That report contains two pages: process and time analysis.

The process page contains a process map, other visualisations and filters. The process map displays an overview of all activities and the connections between them. Every case has a starting and ending point, with in between one or more activities. The sequence of activities might differ per case, so those differences will result in unique paths. In process advisor, they’re called ‘variants’. Details like frequency (number of cases) and activity durations are also displayed on the process map. The page also contains two cards, three donut charts, two bar charts, two column charts and three filters. There are also custom filters, they depend on other columns that were imported besides the mapped ones.­ 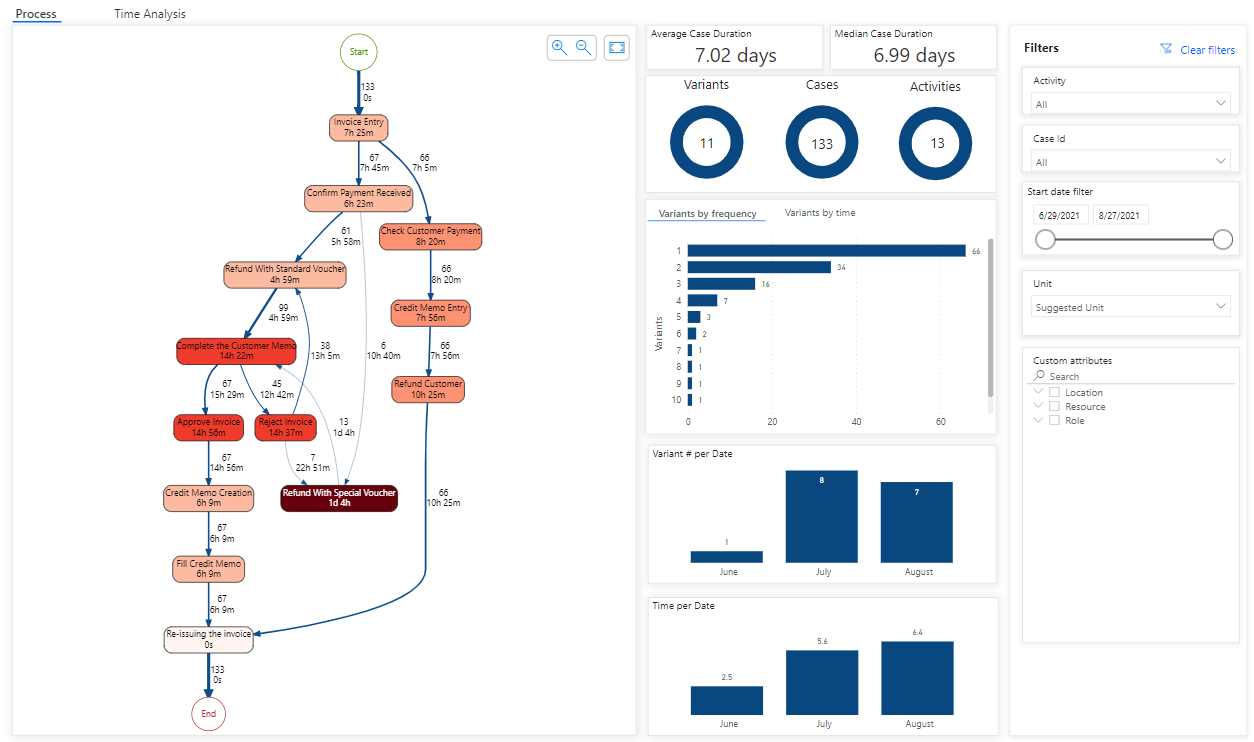 The time analysis page consists of five visualisations, related to the time spent on activities, cases and variants. It has the same filters as the process page. 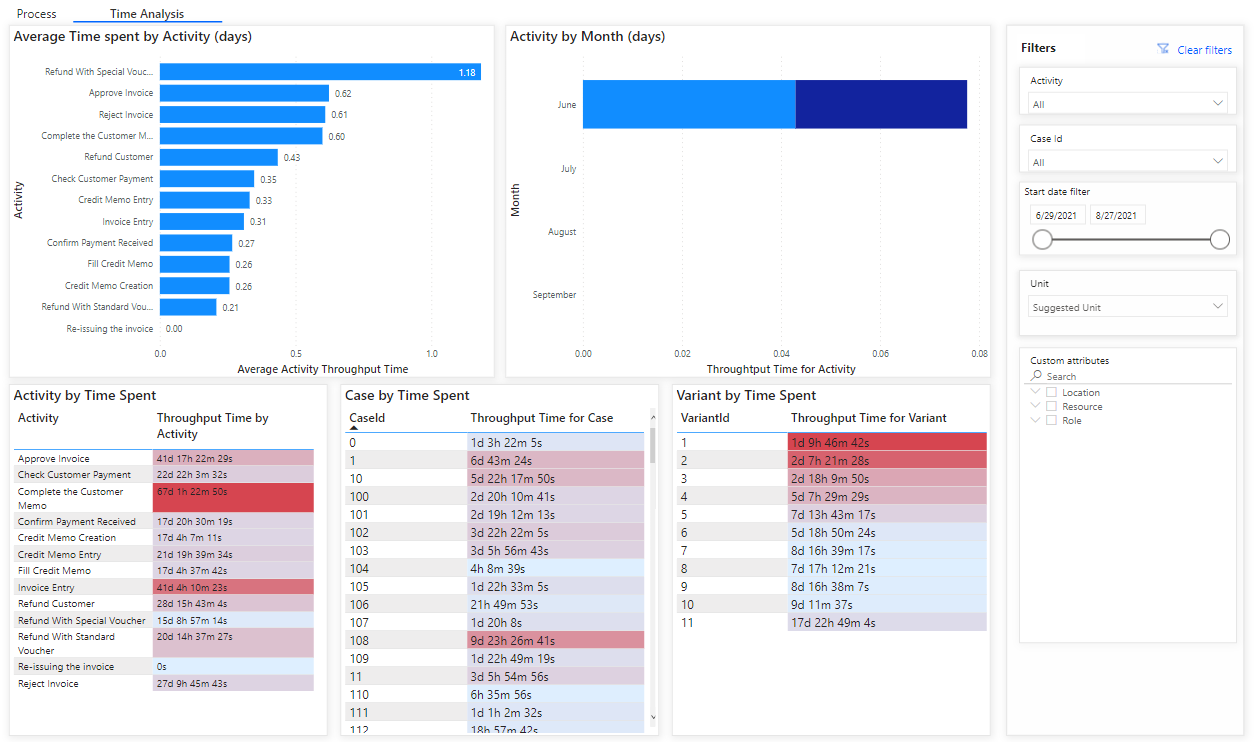 The report has two limitations:

Apart from filtering options, the report supports cross-filtering and cross-highlighting too. The former filters a page, so it removes all the data that isn’t essential and redraws the graphs. The latter only highlights a subset of the data. The other data then becomes less visible. They provide a deeper understanding of which factors have an impact on the processes. Unfortunately, the filters and highlights are not applied to both pages at the same time. They reset when switching from one page to the other. Another downside is that there is no search function for the fixed filters.

To illustrate some of the uses of process mining, we will present three examples while using the sample dataset provided by Microsoft. It contains processes from a fictional financial department that handles invoices.

The first example is about zooming in on the two most frequent variants from July. In this case, the variants can be clearly distinguished in this case. 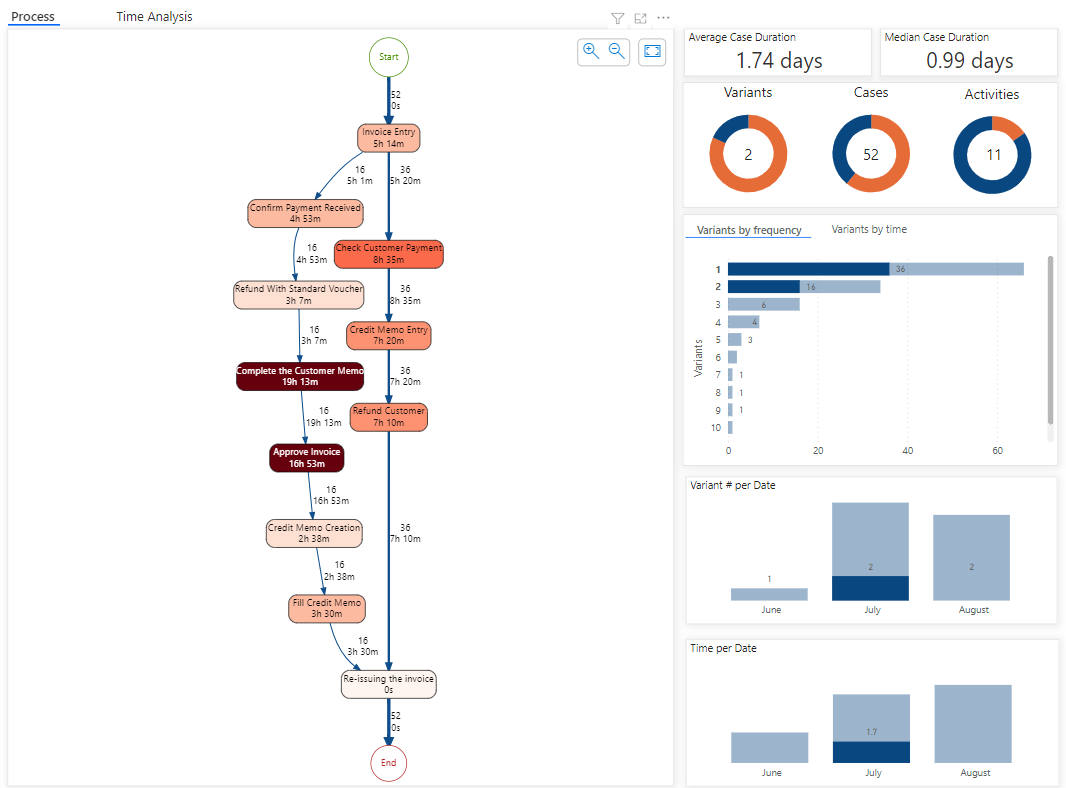 To get a better view of the average throughput time, switch to variants by time and select the two variants again. Variant one takes an average of 1,18 days and variant two an average of 2,3 days. Because these are frequent variants, it is important for the organisation that they run as efficiently as possible. In order to shorten the throughput time, investigate the processes that take the longest. In this case, we will investigate check customer payment, complete the customer memo and approve invoice. They can be easily spotted by their darker tint of red on the process map. It's important to point out that these two variants also have the shortest average throughput time. There are situations where it’s more interesting to check out variants where a lot of time was lost, like variant 10 and 11.

For the second example, let’s take a look at the case that has the longest throughput time, namely case 83. It can be found by going to the time analysis tab, a very useful tab to compare cases and variants against the average durations. By making use of cross-highlighting, the details of case 83 are highlighted on the visuals. The fictional organisation needed 18 days to finish the case and it followed variant 11. With the overview of the average times for the activities, the following question can be answered: “How much time was lost due to which activities for case 83?” The activities that stand out are invoice entry, credit memo creation and refund with standard voucher. These activities took more than twice of the average. To figure out why there are such long processing times, it’s crucial to get in touch with the right people of the organisation. 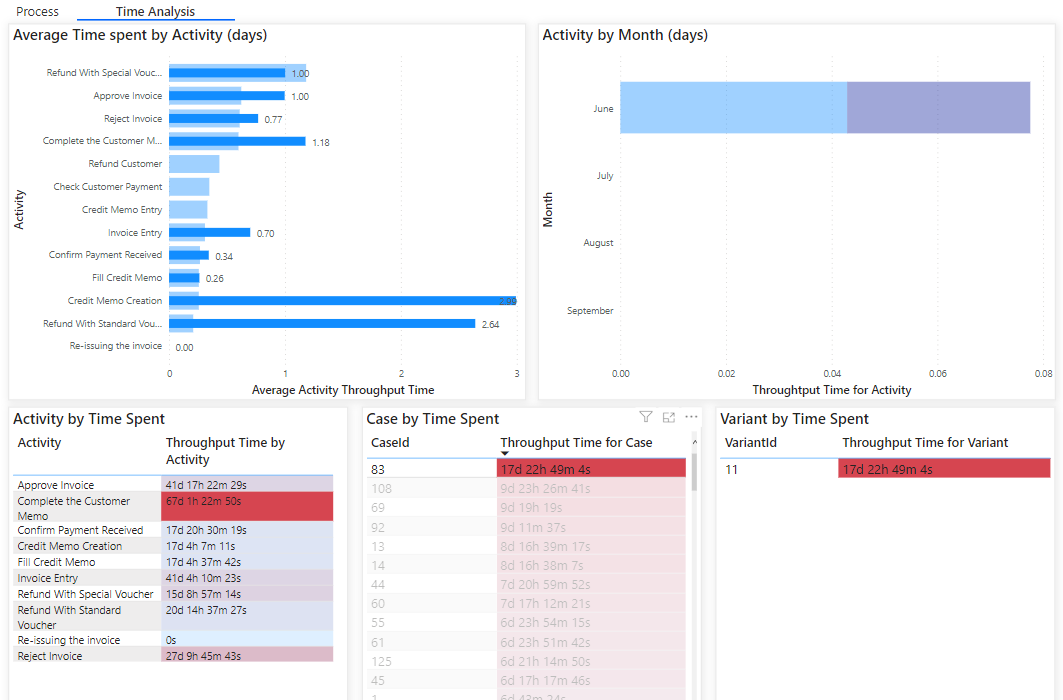 For the third example, we’ll investigate how the custom filters can help in order to analyse the processes in a different way. In the example, the location from where the activities were executed will be used. With many human actions involved, there is undoubtedly a difference regarding the case durations. Below can be seen to what extent the KPIs are influenced when one or another location is selected. The employees in Seattle do only 50% of the cases and there is a major difference on case duration. In a real-life situation, this would call for further investigation as to why there is such a significant difference. 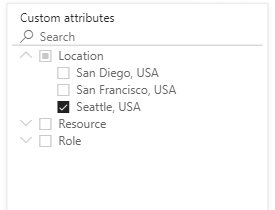 As a business user, it’s important to often look at different tools in order to investigate which tool suits what situation the best. This is why we have chosen to compare process advisor with Disco. It is a process mining tool that was released about 10 years ago and developed by Fluxicon. Below we will highlight some differences between the two tools and discuss when to use which one. The demo dataset of Disco was used.

Importing the data works a bit differently, but mapping the columns is also required in Disco. The part where Disco really lacks is the supported import formats. While process advisor supports countless formats from importing files to connecting to databases, Disco only allows a handful of file formats like csv, Excel, MXML and XES.

In terms of number of visualisations and KPIs, Disco takes the lead. It has a graph for almost any statistic (e.g. events over time, case variants, medians, means…). The KPIs include more relative frequencies, as in how often a resource, location or activity occurs compared to the total occurrences. The visualisations include more statistical information, like means and deviation. For example, for every activity an average and median duration and a box plot for the duration range is given. As a consequence of so many tabs and visualisations, it is hard to keep an overview of the processes. Something that Disco misses, that process advisor has, is the ability to compare the average activity duration from one specific case to the total average for that activity. 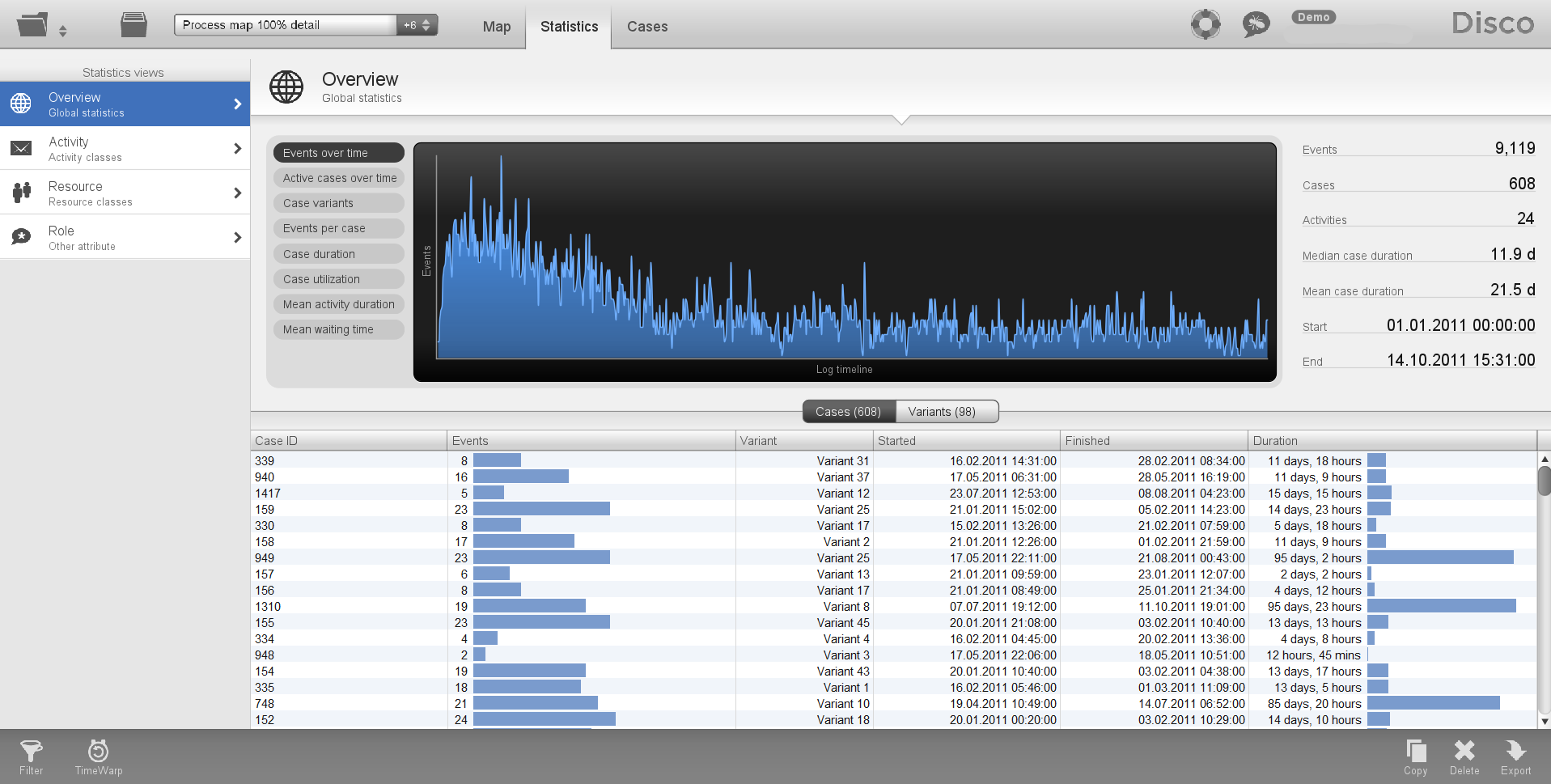 Disco can also show by who, referred to as resource, the activity was executed. This is possible under the condition that that data is available and imported. In process advisor, seeing by who an activity was executed is not possible. Opening the file with for example Power BI is then required, but not convenient.

There are a lot of other capabilities available in Disco. To name a few: exporting data and visuals, animated process map and saving a filtered dataset separately. Many capabilities remain unexplored for this insight.

To conclude this comparison, process advisor versus Disco is a case of quality versus quantity. As a business user you’ll need to ask yourself to what extent process mining is going to be used. Disco has more visualisations and other features in some aspects, but how many of those many extras are a necessity? In our opinion, it will take longer to learn to work with Disco than with process advisor. On top of that, process advisor’s readiness for many data connectors is a major advantage.

Process advisor is a great tool to start with process mining. It’s a great way to quickly gain insights into the processes happening and immediately spot bottlenecks. The integration of Power Query also comes in handy when transforming the data before mining. The report that it automatically creates is functionally sufficiently and powerful enough to find the underlying cause of performance issues. Finally, the choice between process advisor and Disco mainly depends on the desired data connection, available time and the extent of the usage of process mining. We recommend to choose for process advisor in case you use today's modern data connections and want a quick but qualitative insight into the processes.

Over the years Power BI evolved a lot and with this originated several ways of working with it. There are different license models, free and paying. Next to a desktop version there is also a cloud version and recently Microsoft released an on-premise server version. How do you start and what license do you need? In the cloud, or on-premise? In this insight, we will try to explain the different flavours of Power BI.
Insights