For a relatively small organization of 150 people, SITA Remediation Finance & Administration Manager Guy Roefs has a performance management application which may compete with those of large companies. It supports not only standard reports and an interactive analysis environment to monitor finances, sales, planning and budgeting, but also production. That enables a professional monitoring of the key business processes. This should not only lead to better administrative processes, but also to better operational and hence financial results. "It was from the outset intended to not only make the financial processes more efficient, but also immediately offer support to the project engineers, logistics managers, vendors and the top of the company" says Guy Roefs. With this in mind, a broad consultation of all stakeholders took place, resulting in a solution which adds value to everyone. 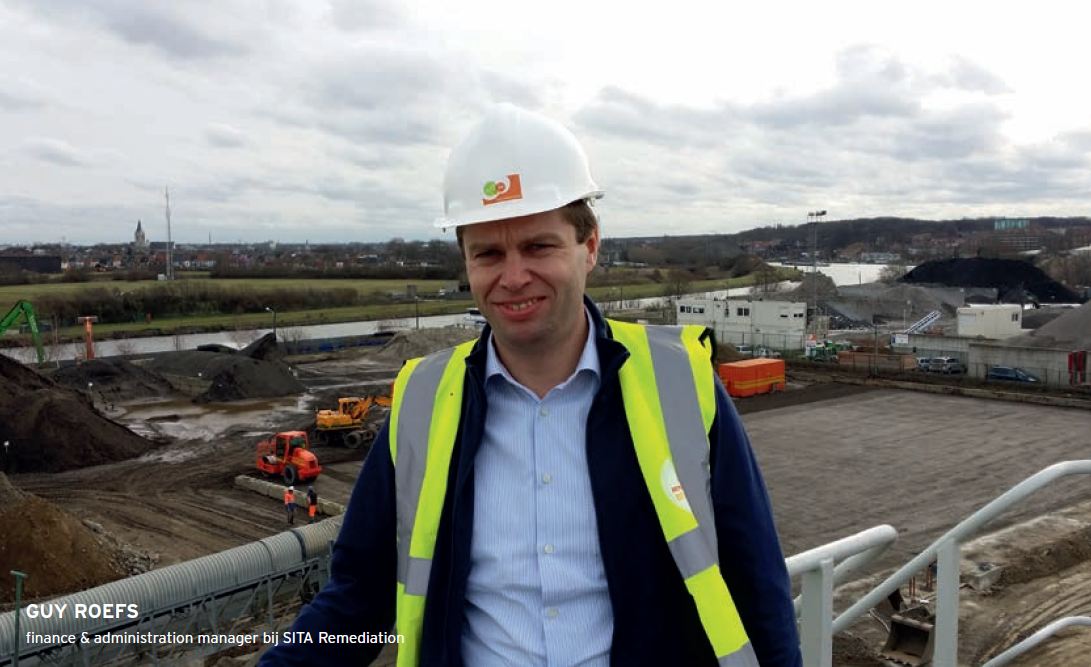 More and faster reporting
SITA Remediation in Belgium is part of the SITA Specialites department, and as such belongs to the French organization, not to Belgian branch SITA. It has therefore always reported to the French headquarters and already had strict rules in place in terms of size and timing. The company traditionally had to fit into the systems of the group. That meant that it must close monthly with strict deadlines and consolidation rules. In addition, a strong tendency developed within the group towards fast-close procedures. To meet these demands, SITA group had purely financial reporting based on its own ERP system, supplemented by documents from databases and spreadsheets. It was limited to the key figures, because that is what headquarters was especially interested in. Additional financial and operational reporting happened, but often by the people in the organization: project managers, vendors and other leaders who all drew their own reports. For more complex reports, they came to the finance department. Guy Roefs: "We had a lack of proper follow-up of all of the projects and the pipeline for sales. The composed documents had problems with inconsistencies compared the various reports. We were also in a phase of rapid growth, with our sales increasing from 22 to 34 million per year. This had been achieved through a lot of work with subcontractors and with a minimum of new people. In doing so, we played more and more the role of specialist and coordinator. This also meant that project managers needed more and faster reports. That is why we decided to invest in a performance management application from IBM Cognos based on a data warehouse (Microsoft SQL Server)."

The analysis of the existing situation was done by the consultants of element61, led by Toon Puissant. "We proposed an architecture based on that analysis, we identified potential suppliers and mapped out a timeline. Mid-2011 we started with the development of the architecture that combined the data from the various existing applications in a data warehouse" says Puissant. The IBM Cognos BI Express application (version aimed at the SME market) retrieves the data from the data warehouse, structures and presents it in a uniform way. Various dimensions were used, such as project, customer, supplier and site. They exist in many operational systems, and are not always handled in the same way. The performance management application removes those differences. Guy Roefs: "That is very important when transactions are linked to it. For example we have customer lists in multiple systems, but there should be no differences between them at the time of invoicing.

That is how we resolved it."
Commercial pipeline

The consultants also urged on installing processes in order to keep the system alive. Puissant: "The report on the commercial pipeline stands or falls with the input of the sellers about their dealings with customers and their assessment of the progress of the negotiations, which should all be captured in the system. That discipline is not always there. Even afterwards when the system was delivered, we saw that the sellers still made ??their own reports, which of course differed from the standard report. The management had to make it clear that they only worked with one document, and it is everyone's duty to fill in the data in the correct place. In the proposal of element61, financial reporting was the first domain to be handles. This was mainly due to the financial department, as they are closely involved in all forms of reporting. In addition, traditional financial data are the best in terms of structure. The dimensions that are used, will be reused in other domains. Guy Roefs: "We've considered from the beginning the specific requirements and expectations of the reports in other domains. For that reason, various reports were simultaneously developed. It made the implementation process demanding, with occasional weekend work for myself and the entire financial team, because we always were involved closely with all decisions and developments. That investment was needed to quickly reap the benefits, but the parallel execution of various projects also has its limits. Puissant: "We see companies hire an outside consultant, but also internally there must be the capacity to provide input for the construction of the new application. These same people should also validate the software. This requires a lot of time and energy, but due to the commitment Guy and his team, they now work completely autonomously with the performance management application. For new projects they just need us for some crucial and specialized activities."

For the finance department, there is now a huge burden off their shoulders as they now don't need to worry about different reports. The figures are now being handled in a consistent manner throughout the company. And reports are now always available for the persons concerned by a the push of a button. The new reports make it possible for financial people to improve, for example by reducing the order-to-cash cycle to get the money faster. Guy Roefs: "We were able to show that through a faster follow-up of land supply and analyses, we were able to also invoice faster. By doing so, the money came in faster. That was necessary to always have sufficient means during the phase of rapid growth. Now we can generate a much larger turnover with the same capital." That the system is now running smoothly is proven by the fact that the Dutch organization can now also be tracked by the same tool, without great problems. "In addition, we have also noticed that through better reporting, an entire administrative burden is removed from the shoulders of the leaders there. They can now focus on their work and meanwhile achieve a lot better results" says Guy Roefs.

SITA Remediation is a specialist in soil remediation, which is done at the customer site. Often it is necessary to excavate the earth and process the soil in Grimbergen or other Belgian locations. The group has a number of facilities in neighboring countries, for example for the thermal cleaning of heavily contaminated soils under controlled conditions. SITA Remediation in Belgium also functions as the headquarters for the offices in the Netherlands and Germany. The group has a turnover of about EUR 50 million with 150 employees. The branch in Grimbergen is also responsible for processing invoices and financial records.